"To dance is to be free, is to express yourself in a way that nobody else can, to be at one with yourself, with others, with the universe,
to bind your creativity with your intuition and to be calm in the knowledge that you can succeed.
To be a dancer is to be whole."
- Celtic Blondes 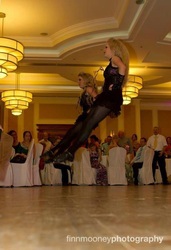 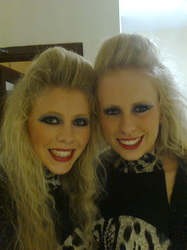 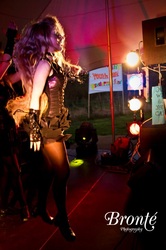 Photograph courtesy of Bronté Photography
The Celtic Blondes are a nationally known ‘Traditional Irish Dance Duo with a Modern Twist’ consisting of sisters Rose-Elizabeth Carey (29) and Daisy Carey (30). All of the routines in the Celtic Blondes’ repertoire have been self-choreographed to specifically tailored music tracks from many of the hit dance shows. Throughout twenty-three years of competitive and performance experience, the Celtic Blondes have achieved awards at Dublin, Provincial, National and International levels, in addition to qualifying for the World Irish Dance Championships. These dancers have performed on stages around the world, some of which include the N.E.C in Birmingham, the Science Museum in South Kensington, London, the Irish Entertainment Awards, the Ladies International Solheim Cup Golf Spectacular, the Marquee in Drumlish (alongside The Aftermath), the Nathan Carter Stage at Moynalty Steam Threshing Festival, John Joe Nevin’s Olympic Homecoming Celebratory Concert, Auditorium Orpheus - Educatorio Della Provvidenza, Turin, Italy and in Rivoli, Turin, Italy.

Although the Celtic Blondes have appeared on Irish TV (Sky Channel 191), TG4's 'An Jig Gig' and 'Feis And Blood,' and on TV3’s ‘The Apprentice’ and ‘Ireland AM,’ they describe their greatest achievement as receiving three gold stars on Sky Television’s hit dance show “Got To Dance,” whilst reaching the judges' shortlisted selection. As well as undertaking performances of this kind, the Celtic Blondes are avid charity workers and volunteers, and they have helped to raise thousands for various charities across Ireland.

The Celtic Blondes both hold Honours Degrees in Irish Music and Dance from the Irish World Academy of Music and Dance, University of Limerick.  Their ultimate ambition is to open their own Irish Dance Academy to aspiring young dancers, and to continue to spread their love of performance to the younger generations.

“What makes our act unique is that we are both accomplished Irish Dancers, and we both have very long, natural blonde hair, which enhances the visuals of our act. We are dedicated to performing, and we strive for perfection in all that we do."